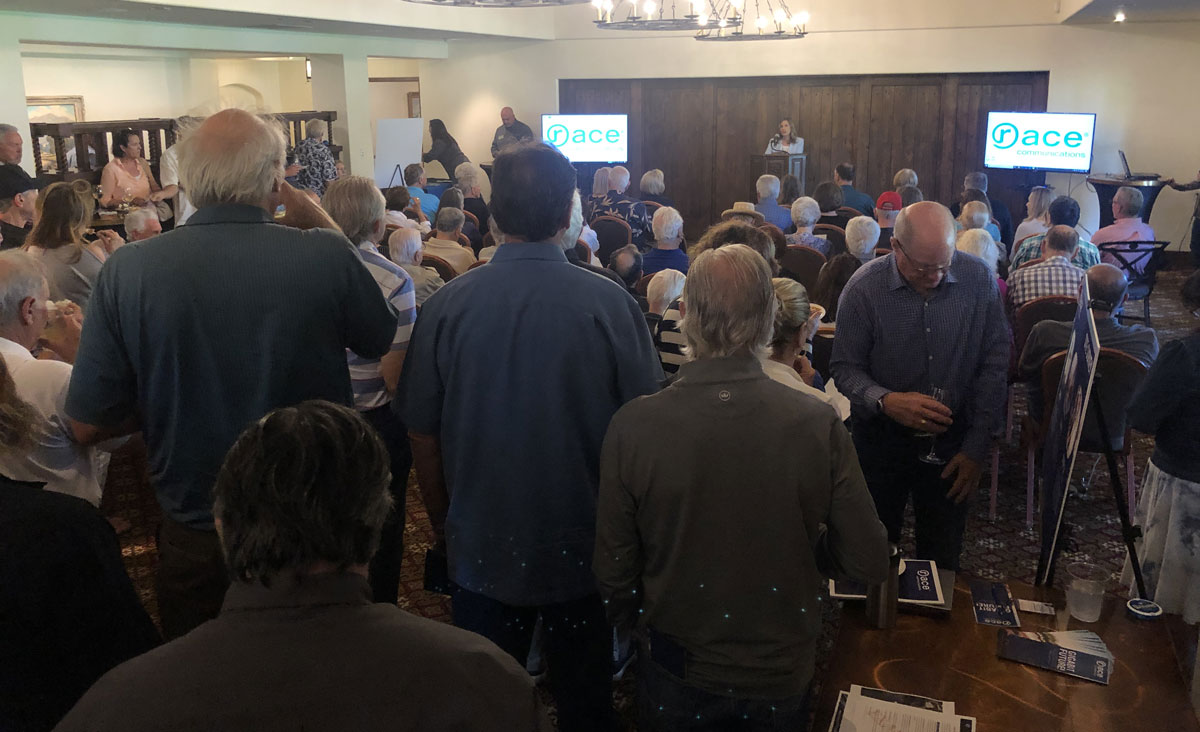 A standing room only crowd packed the 1929 room in the Golf Club restaurant last night to hear the latest from our fiber Internet Service Provider, Race Communications.

The big news is that RSF Connect is live and is giving the Golf Club the first gigabit Internet link in Rancho Santa Fe. Raul Alcaraz, Race CEO, started the evening with a live video conference tour of the RSF Connect central office, suitably populated with fiber and equipment racks. Ken Markstein hit the button for the ceremonial first SpeedTest and sure enough, it showed 958 Mbps upload speeds, which is the theoretical limit for gigabit Ethernet.

No houses have been connected yet, but Race will start doing site surveys next week for the 85-90 houses in Zone 1 that have expressed interest. Assuming some people sign on the Docusign dotted line next week during their site survey, the first house could go live in less than 2 weeks.

Raul gave a much more realistic estimated installation time for everyone who initially signs up. Some lucky homeowner will likely be hooked up within a couple of weeks, and the worse case will be within a year from now, so first half of 2020 at the latest. He says that the gating factor will likely be conduit construction, which is why I urge everyone to build their own conduit. Raul told me that company wide they are installing over 600 new customers a month across their 25+ locations around California.

HP Communications, the backbone fiber installer, is very confident they can get the entire backbone installed by the end of the year, including all private roads. They are starting private road construction now, so don’t delay getting your private road authorizations into them if you are on one.

I asked HP why the delay on getting the final paving patches done as there seems to be a proliferation of temporary patches all around Rancho. It seems that they actually want the temporary patches to stay on the roads for 4 weeks or so to let the slurry fill harden and compact before putting on the final patch. I have seen some permanent paving that has caved in somewhat so I suspect this is one of their ways of dealing with it.

The Internet speed is truly impressive. I surreptitiously did a few more tests on their live connection and found very short 4 ms ping times to important Internet destinations. I also did a speed test beyond the Race network through their Los Angeles Internet exchange and still found blazing fast 900+ Mbps speeds. Race tells me that they are directly peered with both Netflix and Google (YouTube).

What this all means is that we are going to have a truly premium Internet connection. No video buffering at all for anything. Blink and you missed it downloads. Super fast gaming that will even allow what is probably the future of gaming, Google’s Stadia, which eliminates the need for high end gaming PCs.

Race’s residential 1 Gbps Internet link will cost $135/month. Race is open to providing a business class dedicated 1 Gbps link for extra $$, and even a 10 Gbps link if you are truly crazy for more $$$. Pricing has not been set for these services yet.

Race also demonstrated their TV service. It looks to be a competent TV service with a DVR that can record up to 150 hours of HD. Video quality is on par with Directv from what I could tell. Cheaper than DirecTV at $98/month, it comes with 250 TV channels including locals, but does not have some premium channels like HBO and TNT. These days, it makes more sense to subscribe to these “channels” directly  using your TV apps or Apple TV/Roku/Amazon set top box. I’ll have more to say about the transition of TV to streaming in a later article.

Finally, $10/month per phone line for phone service, unlimited nationwide calling, and very low international rates (I will save a bundle getting rid of my AT&T bill!).

First, you need to fill in the Inquiry Form. If you don’t remember if you’ve done it, do it again. If you’re in Zone 1, you should get a call from Race within a few weeks for a site survey visit.

Race will figure out the conduit path with you from the street to your house and give you a quote (at $6.25/ft – as I’ve said, it’ll be cheaper and faster to do this part yourself). They will also determine what you need inside your house and what kind of extra services you might want. This can include locating where the inside gear will go, inside wiring, locating where WiFi extenders might be placed, etc. Once this is all laid out, Race will ask you to sign a services contract. Once the contract is signed, Race will then schedule the install itself at a later date.

Race’s initial surveys have shown that about half of Rancho residents have their own wiring or entertainment network person they work with. While Race can do this type of work (like wiring your TV locations, and pulling Ethernet cable), this falls into the extra cost professional services category (ie. over and beyond simple Internet hookup), and Race is likely to be bottlenecked for professional services for Rancho.

Race has been impressed by the number of signups they have had so far, at about 600. My own guess is that about half of all residents will initially sign up, or about 1,000, and then more over time, of course. I got the impression that a fair number of people who attended the event tonight had not signed up yet as they were waiting until it became more real. Well, with a live demonstration, it’s pretty real! 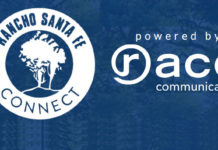