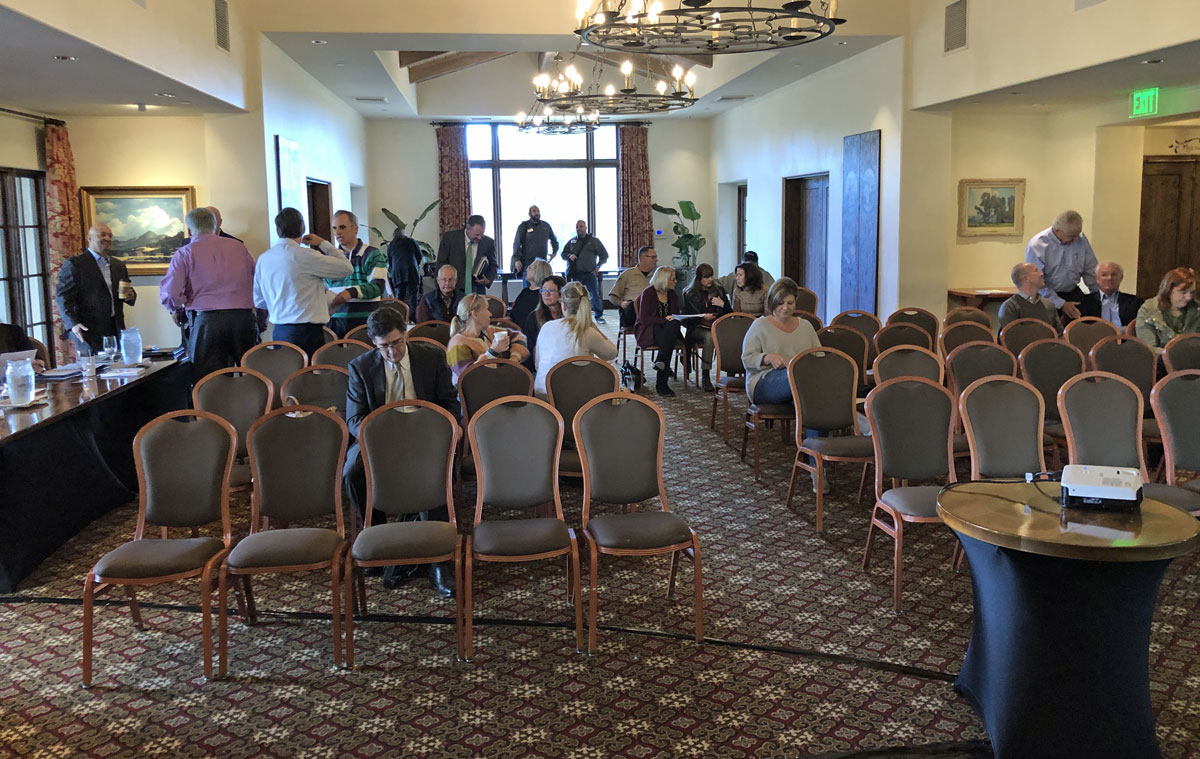 Nothing? Something? It got tense and testy at times at this somewhat lightly attended Board meeting. Here are are my notes.

Raul Alcaraz, Race Communication’s CEO, did a victory laps of sorts. He stated that Race was on track and had addressed the significant problems that had been voiced at the last Board meeting. As promised, all zones have been released and anyone in the Covenant can now order service. He was happy that 800 members (out of about 2,000) have expressed interest with no marketing effort. 600 people have put in orders, putting RSF Connect very close to the expected take up rate.

Going forward, their goal is to install 20 customers a week. This would mean that all remaining customers who have signed up as of now would be installed by the end of April. I will be happily amazed if we have 600 installed customers by the end of April. Regardless, hopefully Race continues to increase their installation capacity to hit that approximate 80 installs a month number (they did 41 in December).

Board member Mike Gallagher, who had some critical words for Race at the last Board meeting, was complimentary this meeting saying that he had heard good things in the past month. Another member from the audience said their recent install was fast, efficient and only took 30 minutes. Here’s the latest installation chart: 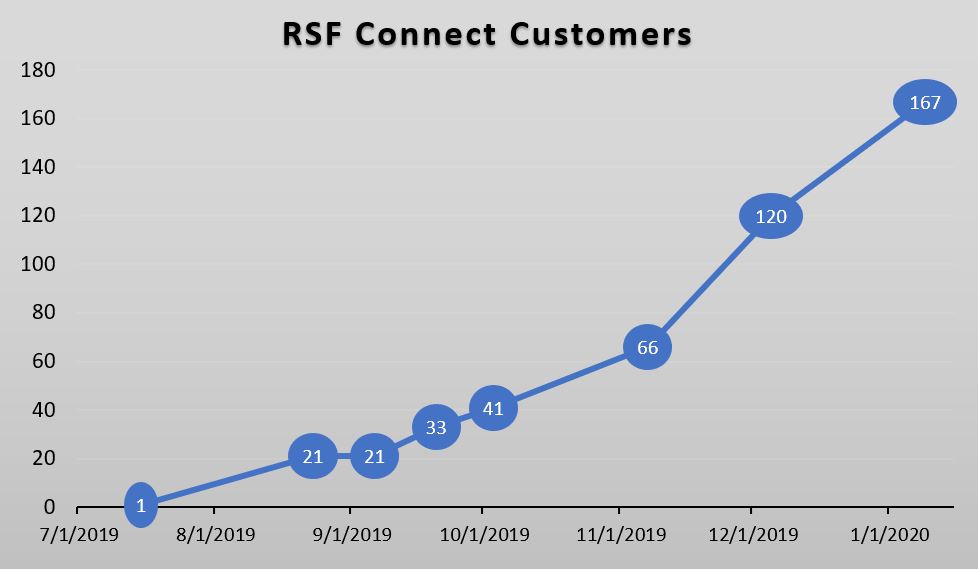 The Reverend Dr. Jack Baca gave a talk explaining why the Village Church is requesting to build a 300-350 niche columbarium in an interior courtyard. Details, including why this is a problem for the Association were given in this previous article.

Dr. Baca gave a history of the Church (facility opened in 1959), and how many non-religious community groups it serves (eg. AA groups, RSF Women’s Fund, community concerts). He also showed statistics showing how cremations have increasingly become preferred over burials.

Dr. Baca’s pitch to assuage the Association’s problem with the Covenant wording boiled down to two arguments. First, that the word “Columbarium” meant something different in 1929 than it means today. In 1929, it generally referred to large buildings, whereas the Church is looking to build three walls in a hidden courtyard. Second, certain prohibitions in the Covenant have simply become old fashioned such as the prohibition against saloons. The saloon prohibition is in the very same sentence as the one against columbariums, yet we have bars operating in the Village today.

Board President Rick Sapp thanked Dr. Baca for his presentation and stated that the Board needed to consult with legal counsel and let the community express its views. Board member Mike Gallagher said that absent a community wide vote, if the Board were to simply interpret the restriction to allow the Church to proceed, it would lead to a slippery slope allowing future Boards to interpret many other provisions.

Director Steve Dunn pointed out that the community has already been apprised of the request through articles in the Rancho Santa Fe Review, the Union Tribune, and the RSF Post. He expressed frustration that this Board meeting wasn’t accomplishing anything. Gallagher said that he appreciated the frustration, but that the full Board had only been apprised on this issue five weeks ago (since the Church request had originally gone through the Art Jury before the Board saw the application).

Association lawyer Bill Budd talked about the process to modify the Covenant stating that it need not be a one day vote, like what is done for Directors. Covenant modification votes can take place over many many months and include signature drives.

Dunn stated that he thought a Covenant modification would be impossible due to the high bar (2/3 of all members, not just 2/3 of people voting on any action). Budd concluded stating that further input from him should occur in executive session.

Al Lau, the fairly new SFID General Manager gave us a long overly detailed talk about SFID history, engineering, and a bunch of nitty gritty details, to the point that Director Rick Sapp had to interrupt and ask Lau to move it along.

We eventually got to discussing rate increases whereupon the Board and members in attendance challenged Lau on specific points.

The crux of the matter is that low volume water users pay lower water rates than high volume users. This appears contrary to CA law which mandates that water customers cannot be charged more than actual cost. SFID justifies this in their Cost Of Service Study by allocating inexpensive local water to low water users, while mostly allocating expensive imported water to large customers. This arbitrary allocation is their fig leaf that allows them to continue having unequal rates for different customers.

Lau stated that staff did present to the SFID elected board a rate proposal where we would all pay the same uniform rate. Not surprisingly, the five member SFID Board, which is composed of 3 1/2 members that represent low volume customers, and only 1 1/2 members who represent high volume customers in Rancho Santa Fe and Fairbanks, voted down that proposal.

Since the number and representation of SFID Board members is based on population size and not water consumption, the fewer large water users do not have effective representation.

Lau presented a different rate increase chart than the one I had prepared myself. His chart took into account fixed meter charges, while mine did not since I don’t have that data. I have asked the SFID for the backup data for their chart so that I might be able to show a more comprehensive analysis. If anyone reading this has a 3/4″ service and has SFID bills going back 17 years, please send them to me – that’s the info I do not have.

During the Q&A session after the powerpoint presentation, various Board members and the two SFID representatives exchanged tense words back and forth with the Association expressing their disappointment over the new rates and the SFID justifying them.

Yeah, I know, your eyes are glazing over just reading that heading, let alone reading this four page legal process (link to Board resolution).

BUT if you are or are planning to renovate or build a house in the Covenant, this now official and in-force document has potentially significant ramifications for you.

In a nutshell, your RSF building permit can now be challenged at anytime by any other RSF member. Even though you have Association approved building plans, any member can challenge that the Association didn’t adhere to any number of guidelines and rules when making that approval. So you could be halfway through construction and the Association could rule that they made an oopsie and in fact your approved project is no longer approved.

I honestly cannot think of any other building jurisdiction where a building permit can be deemed to be invalid through no fault of the builder/owner once it is issued.

Interestingly at the Board meeting, two Art Jurors present stated that they had made comments about the IDR Process for Ary Jury decisions, and those comments had not been incorporated into the final IDR process. I have asked the Association for those comments and will update you on their response.

Due to January 1st California law changes, the Association had to implement new rules regarding elections and other matters (link). The most substantive change that jumped out at me was that the Association can no longer suspend a member’s voting privileges (which they do for non payment of dues or fines). The new election rules are being posted for a 28 day comment period before being likely ratified at the next Board meeting.

In addition, the Association converted a number of contractors into full time employees to conform with a new law about what constitutes an employee.

In last December’s Board meeting there was a substantive discussion about over development of small lots (link). Staff stated that they will produce a proposal for comment for February’s Board meeting.