In my last article previewing this meeting, I urged members to send in their thoughts to the board regarding the many topics that were to be discussed. 22 of you did. Read on to learn what the board decided to do with this information.

The association has posted for comment an extensive revision of the grading regulation. While this was described as a working draft, it sounded like both the board and the Art Jury were in agreement over the main changes which were:

There are many more changes in the draft. The bottom line is that this makes it harder to develop or re-develop property. In my opinion, the consequence will be less development. Older houses that should be torn down will be less likely to be redeveloped now, and property values will likely suffer overall.

The fourth time was a charm. The board finally passed a new solar energy system regulation to replace the flawed one that was put in place eight months ago. The board adopted this new regulation even though changes had been made since the last time it had been posted for public comment. Significant items in the new regulation:

This works for sloped roofs, but not for flat roofs. Flat roofs that have a raised parapet can hide solar panels that are not parallel to the flat roof. On a flat surface you would typically slope your panels 30 degrees to capture the most amount of sunlight year round.

The board adopted the proposed Osuna rules with one major change.  Background on the rules here.

The Association had posted for comment Osuna rules that among other things proposed three construction items:

Director Laurel Lemarie voiced opposition to either gate being locked at any time. The northern trail access locked gate would prevent riders from going on moonlight rides, and blocking Seitz would prevent him from giving the Association a trail easement. Since the point of the gates is to prevent runaway horses from leaving Osuna, you could still have gates, but leave them unlocked, allowing riders to open and close the gates.

Director Rick Sapp proposed that the Osuna rules be adopted, with the proviso that the gates remain unlocked at all times. With that modification, the rules were unanimously adopted. Board president Gallagher warned that all equestrians needed to be on good behavior for this to remain. Zero discussion was had on the cost of this.

Our finances are in excellent shape. Revenues for the past six months are 6.8% higher than budgeted. Click here to read the finance powerpoint presentation to the board. This is the key slide: 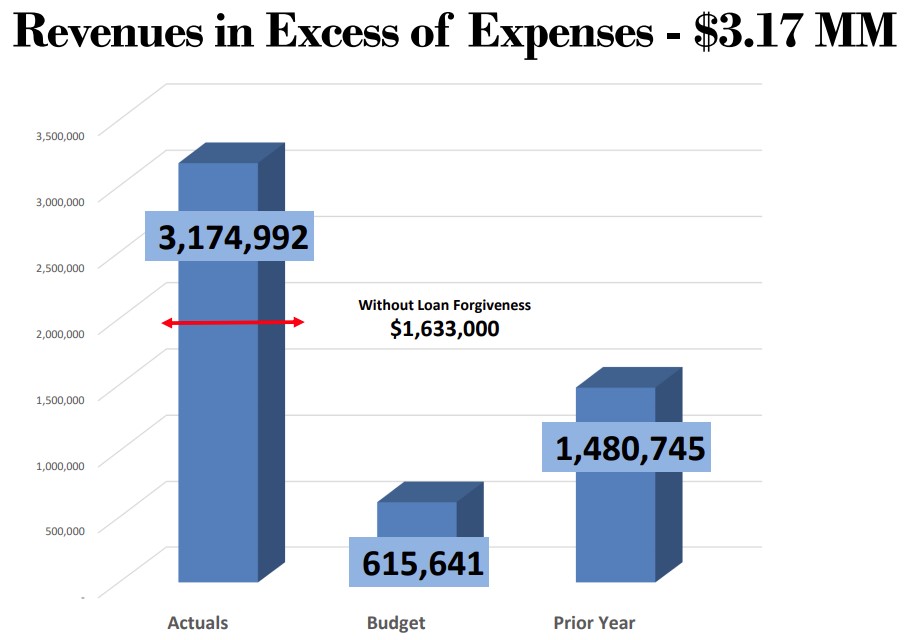 Remembering that these are half year figures (6 months out of 12), the Association has made a “profit” of $3.2M during the past six months (including the federal government PPP loan forgiveness) as opposed to $1.5M last year and $620K in the intentionally conservative budget. If trends continue, that would mean a yearly “profit” of $4.8M for fiscal 20/21 (there won’t be a second loan forgiveness). Regardless of projections, the Association has extra money to spend on improvement projects, should it decide to spend it.

CFO Seth Goldman stated that work for budgeting for the 21/22 fiscal year is underway/starting.

Consultants To The Rescue!

Association staff asked to hire two consultants to help finalize the four outstanding regulations that the board wants to update: Grading, Building Materials, Lighting and Architectural Styles. Phase A would hire Kerstin Larson on a time and materials basis to help with landscape regulations, not to exceed $10K, and Allard Jansen to help with the aforementioned regulations, not to exceed $68K. Allard Jansen won a competitive RFP process which looked at five submissions. Among other reasons for picking Allard, he has experienced planner(s) on his staff.

As an aside, I think this is pretty funny since of all the architects that frequently submit projects in front of the Art Jury, Allard is known as the most modern architectural style architect.

The board voted unanimously to approve the $10K landscape consultant, but voted 4-2 to approve Allard Jansen (Ruhnau, Lemarie against, Strong absent).

The board would also like to update the Residential Design Guidelines. To that end, they are forming an ad-hoc group composed of the building commissioner, two current Art Jurors, two board members, and two other members. No specifics were given as to who these people would be, and the Association didn’t ask for volunteers in their email blast last Friday. So maybe they’ve already hand picked who they want on this committee. But just for giggles, if this sounds like something you’d like to provide input on, ask to be put on this committee by sending an email to memberinput@rsfassociation.org and see what happens.

Staff member Arnold Keene gave a presentation about the Association’s Arroyo property. He called it the Association’s “hidden gem”. He highlighted its fishing pond and open space for recreation, picnics, hiking, and pointed out that Association staff perform a lot of upkeep work there.

Director Greg Gruzdowich pointed out that “hidden” was the operative word since there are no road signs pointing to it, making it very difficult for Association members to find it. And if you go the Association’s main page, you will find no mention of the Arroyo on any of the main page’s four(!) menus (as an aside, that web site needs serious user interface help). If there is any Association information about the Arroyo, it is well hidden (the same goes for Osuna, by the way, as well as other Association parks).

Director Bill Weber outlined justifications for some minor tennis club renovations, to wit, some tennis club neighbors were complaining about the pickleball courts being so close to them (pickleball is louder than tennis, and the balls hitting the rackets are louder as well). A total of $70K was asked to move the pickleball courts, and to provide some extra patio coverage. The board unanimously approved the expenditures.

Association member Sandra Johnson was appointed to the five member SFID board to replace Marlene King.