Update April 2022. Sometime in the last year, Race Communications installed a speedtest.net server onto their network. You can now routinely and reliably see near gigabit speed results when you use speedtest.net from an Ethernet connected PC on the RSF Connect fiber network. So, use speedtest.net for measuring your Internet connectivity and if it doesn’t show around 800+ Mbps up and down during off peak times, then you might have a problem. Make sure the app has selected “Race Communication, Los Angeles” as the target server for high speed results.

I’ve left the rest of this article for historical purposes. 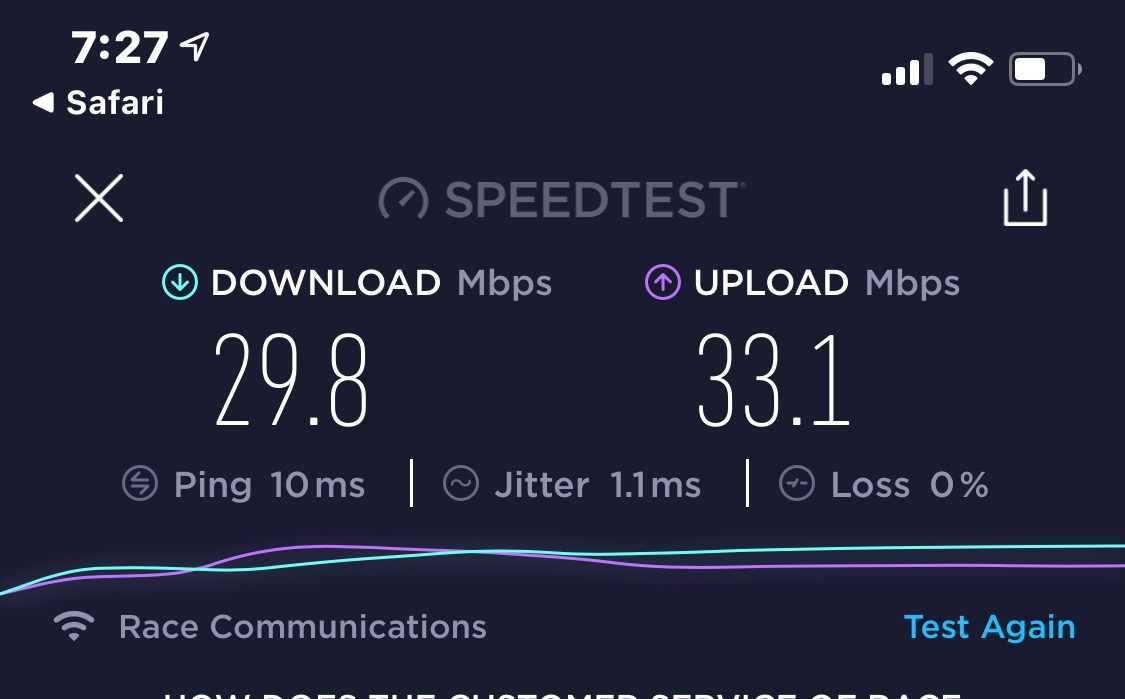 People often ask me why the speed test they’ve just run on their fancy new gigabit fiber connection is so slow. They send me photos like the one here wondering why they aren’t getting anywhere near gigabit speeds.

The answer is that this person made two mistakes.

First, they used the speedtest app, which is the most common, and unfortunately, the most awful speedtest tool you can use (see below for reasons).

Second, they did it via their phone, which has the worst WiFi strength of any device, and moreover, it uses WiFi. When you do an Internet speed test via WiFi all you are doing is testing how good your house WiFi set up is, and not the Internet connection since WiFi is always going to be slower than a gigabit Internet link.

Step 1: Use an Ethernet Connected PC/Mac

Remember Ethernet cables? These days, fewer and fewer people are even bothering to connect their PCs, Macs or laptops using Ethernet cables, opting instead to just connect via WiFi. That’s fine for convenience, but let me repeat: WiFi is a lot slower than Ethernet cables. So if you are one to care about your Internet speed, then you’ve got to test using an Ethernet connected computer.

Here are two side by side speeds tests that I just ran at more or less the same time around 7:30pm Friday night (which is probably the busiest, most congested time for any Internet Service Provider). The one on the left, I did from my iPhone sitting in my bedroom chair which is an “average” (but not great) location in my house for WiFi reception. The one on the right was from my Ethernet connected PC. 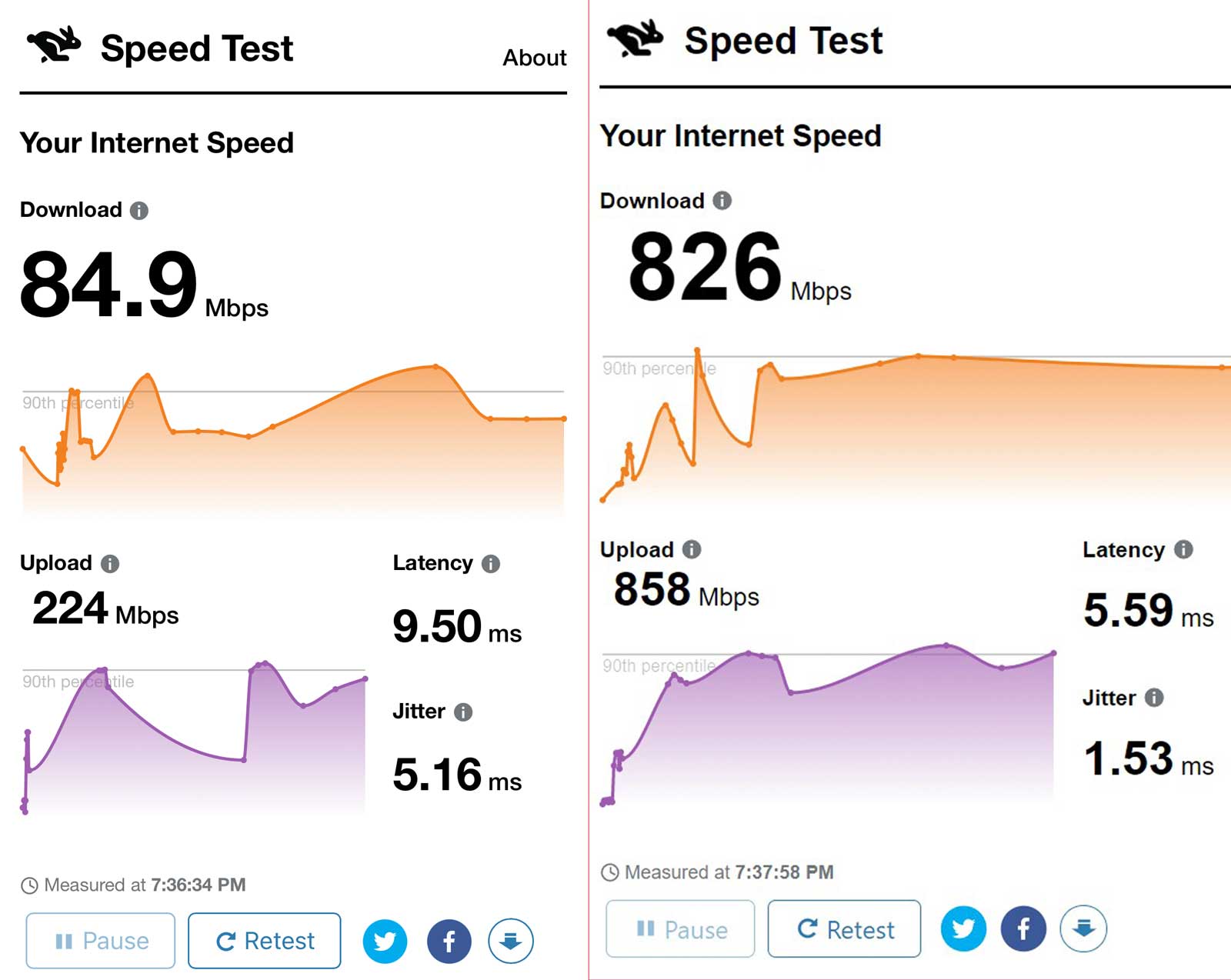 As you can see, I got close to full gigabit speeds from my Ethernet connected PC, while my iPhone got pretty crappy download speeds.

As I mentioned above, the speed testing tool/site you should be using is https://speed.cloudflare.com/ . And, of course, only use the site via an Ethernet connected computer unless you want to check WiFi coverage (but there are better tools for that).

Cloudflare operates a vital piece of Internet infrastructure that you’ve never heard about called a content delivery network. Cloudflare has placed their servers all around the Internet at critical junction points where Internet Service Providers connect to each other. This means that you are never very far away in terms of network connections from a Cloudflare server. These servers keep copies of frequently accessed web pages, videos, and other stuff. That latest viral cat video you recently watched probably wasn’t being sent to you from a distant YouTube server, but instead was sent to you via a close by Cloudflare server.

So running a download test from the closest Cloudflare server is a great way to test how good your local Internet Service Provider connection is since the data isn’t travelling all over the place – it is a very direct connection.

That other service/app that everyone uses, speedtest.net, instead finds the closest geographical speedtest server, which is an awful metric. RSF Connect/Race, for instance, doesn’t directly connect to any network in San Diego. Instead, it has a couple of high speed dedicated telecom links to downtown Los Angeles. Why? Because that’s where the Internet on pretty much the entire west coast connects to. It’s just the way the Internet is built.

Hopefully this short article will help you understand how to properly test your Internet connection. Questions? Please ask.

I’ve been getting a few emails from people whose Ethernet connected devices are showing speeds a bit less than 100 Mbps. This is a suspicious speed because there are actually three Ethernet speeds in common use today. Twenty five years ago, you had 10BaseT Ethernet running at 10 Mbps. That got quickly upgraded to 100BaseT running at 100 Mbps around twenty years ago. Confusingly, the colloquial and marketing name for 100 Mbps Ethernet was “Fast Ethernet”. Of course, 1000BaseT running at 1000 Mbps (or 1 gigabit, Gbps) came along soon after, and that is the common “standard” Ethernet in use today and it is commonly referred to as gigabit Ethernet.

However, there are still a lot of 100 Mbps or Fast Ethernet switches in use.

On a PC, go to Settings and click on “Network and Internet”. Hopefully you should see something like this: 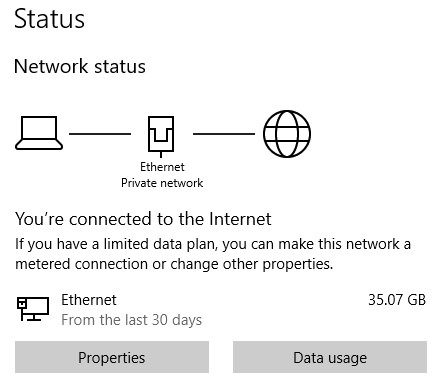 It should say “Ethernet” above the properties – if it says WiFi, then turn off your WiFi and make sure you are connected via Ethernet. Click on the Properties button and scroll down. You’ll see a Properties list and the important thing is the “Link speed”. It should look like this:

Here it shows 1000/1000 Mbps. If it says 100/100, then you probably have a 100 Mbps switch, and you need to swap it out with a gigabit switch. You might have a switch connected to a switch (cascaded switches), in which case you need to check the speeds of all your switches, at that point, you might want to call in some help.

On a Mac, use the built application Network Utility.app. You can find that in your Application folder or by using the Spotlight Search. It should show something like this: 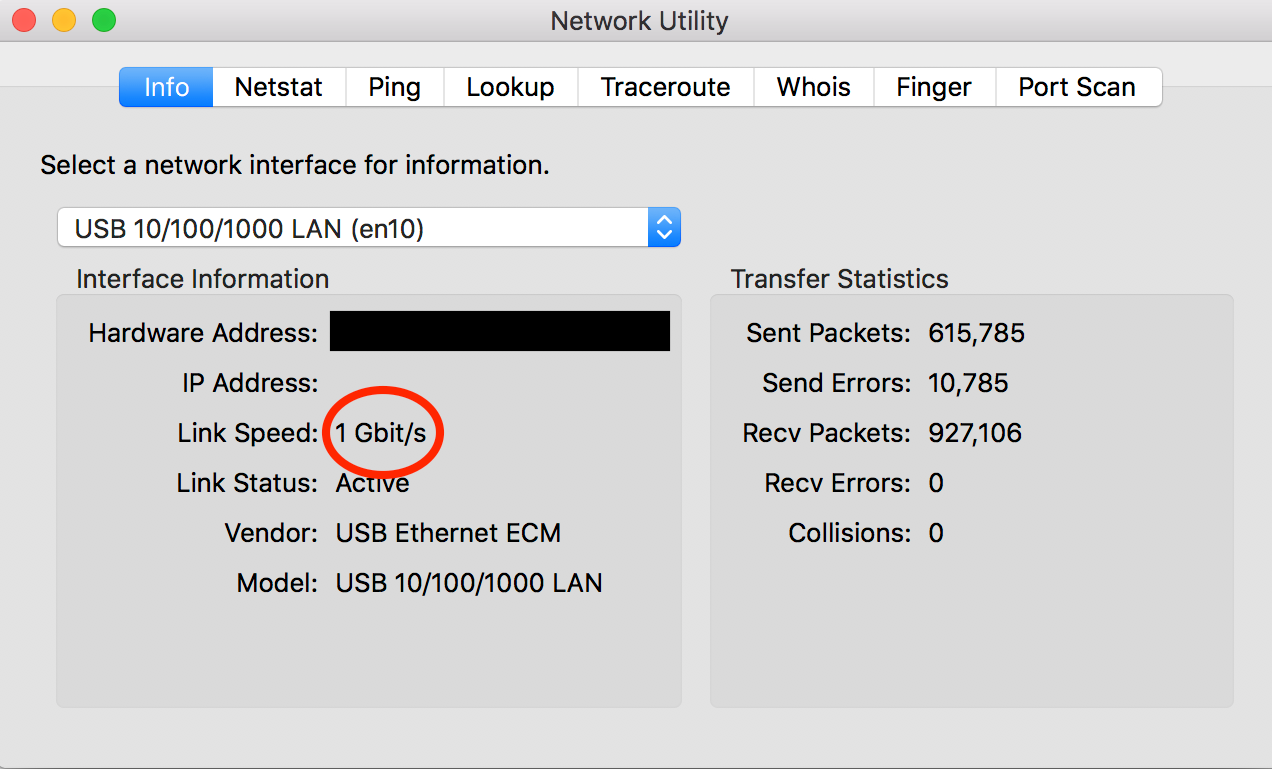 Here it shows 1 Gbps. If it says 100 Mbps, then you probably have a 100 Mbps switch, and you need to swap it out with a gigabit switch. You might have a switch connected to a switch (cascaded switches), in which case you need to check the speeds of all your switches, at that point, you might want to call in some help.

If you have a USB dongle, then it isn’t easy finding the real link speed. It often won’t report to the speed to the operating system. At that point, you will need to find the model number of the dongle and checking its specs online to see if it supports gigabit speeds. You’ll also have to do the same with your Ethernet switch (turn it upside down or whatever, grab the model number and do an Internet search to find the technical specs).

Swapping Out For A Gigabit Switch

Luckily, swapping out a switch is very easy. First, figure out how many Ethernet ports you are going to want now and into the foreseeable future. Then just go to Amazon and search for “gigabit switch”. You’ll find a bunch of them, and you’ll be surprised how cheap they are. Swapping is literally as simple as unplugging the old one and plugging in the new one. Doesn’t matter which Ethernet cables go where.

If your switch is a Power Over Ethernet switch (POE) that powers things like security cameras and WiFi access points, make sure you buy a POE switch as a replacement. 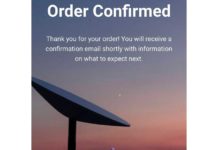