All Association members enjoy using the golf club restaurant and bar.
It’s business as usual in Rancho Santa Fe: “Don’t confuse me with the facts when rumor and innuendo are so interesting.”
The letter from Lisa Bartlett (published in the RSF Review), replete with misinformation regarding the use of the Players Club has unfortunately caused unrest among members of the Association who are not familiar with the history of the Golf Club. Her letters circulating in chain mail and her letter to the editor are almost verbatim copies of dozens of letters we received from her, when I served on the Association Board over ten years ago. They are full of legalese and are difficult and confusing to read.  When I was on the board, because of her letters and complaints we had to spend an inordinate amount of time and money on legal costs to make sure her complaints had no basis—costs paid for from everyone’s Association dues. Mrs. Bartlett no longer lives in our community or state, but continues to disrupt.
1. The Players Club was built at the time the Golf Club restaurant was expanded and remodeled. After a six year planning and construction period, the restaurant opened in 2007 and the Players Club in 2008. The locker rooms were made part of a separate Players Club because it would have made a single footprint much too large, unattractive and cumbersome to use. The  entire cost of the design and construction of both buildings was paid by Golf Club members.  Although the entire Association membership enjoys the use of the restaurant and meeting rooms, it is the members of the Golf Club, not the general Association, who are still paying off the debt for both buildings.
2. The Players Club is built on Association land and with permission of the Association. More than 75% of the Players Club is devoted to locker rooms for men and women and a pro shop. There is a shared use room (Veranda Lounge) between the two locker rooms which golf members use for larger gatherings, tournament breakfasts etc.
3. The letter states that Association members other than golfers will no longer be be allowed in the Players Club. The rules of access for nonmembers haven’t changed since it was built; it is meant for Golf Club members to use before and after playing, storing their equipment in lockers, etc. — not general use for all Association members.  All Association members have access and charging privileges in the pro shop.
4. She also states that 100% of women will be excluded from the Vaquero Lounge (the mens’ locker room) which is the proposed rule change that goes back to its original use. For several years, the club experimented with using half of the mens’ locker room as a multi-purpose room but it was underutilized and the men no longer had a personal space except right next to their lockers. We have had a big influx of new members and the men want to use their lounge as it was intended. The Vaquero Lounge did feature a pool table and shuffleboard game for a while, but those amenities have been removed and the Vaquero Lounge and women’s Bougainvillea Lounge are similarly equipped. Conversely, I don’t want the men using my locker room either.
5. The $300,000 that she quotes as payment to the Golf Club is also misrepresented. Historically, until 2019, the Golf Club members paid for the entire deficit from the restaurant through their dues (HOA restaurants usually run in the red). The deficit varies from year to year, but in 2019 an agreement was reached with the Association because the restaurant is enjoyed by the entire Association membership. In order to maintain a quality restaurant for our community, the Association agreed to share the deficit.
The golf course—entirely funded by the Golf Club members—continues to be one of community’s greatest assets and its preservation and reputation as a quality club which includes adequate facilities is in the interest of all Association members, whether or not they are golfers.
Being able to maintain a quality restaurant, where members enjoy a good meal and are proud to bring friends is also an asset and wonderful aspect of living here.
Remarkably, though many golf clubs have suffered greatly with membership loss, economic downturns and Covid, our club is financially healthy and looking forward to a major golf course renovation process supported by almost 100% of our members.
When the rule change was proposed to return the Players Club rooms to their original purpose, it probably should have been presented with historical perspective so that new members of our community would have a better understanding of the background. However, who knew that Ms. Bartlett even though living in another state would get wind of it and pounce.
Respectfully submitted,
Anne Feighner McCarthy
Association Member 47 Years 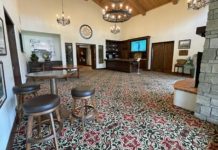