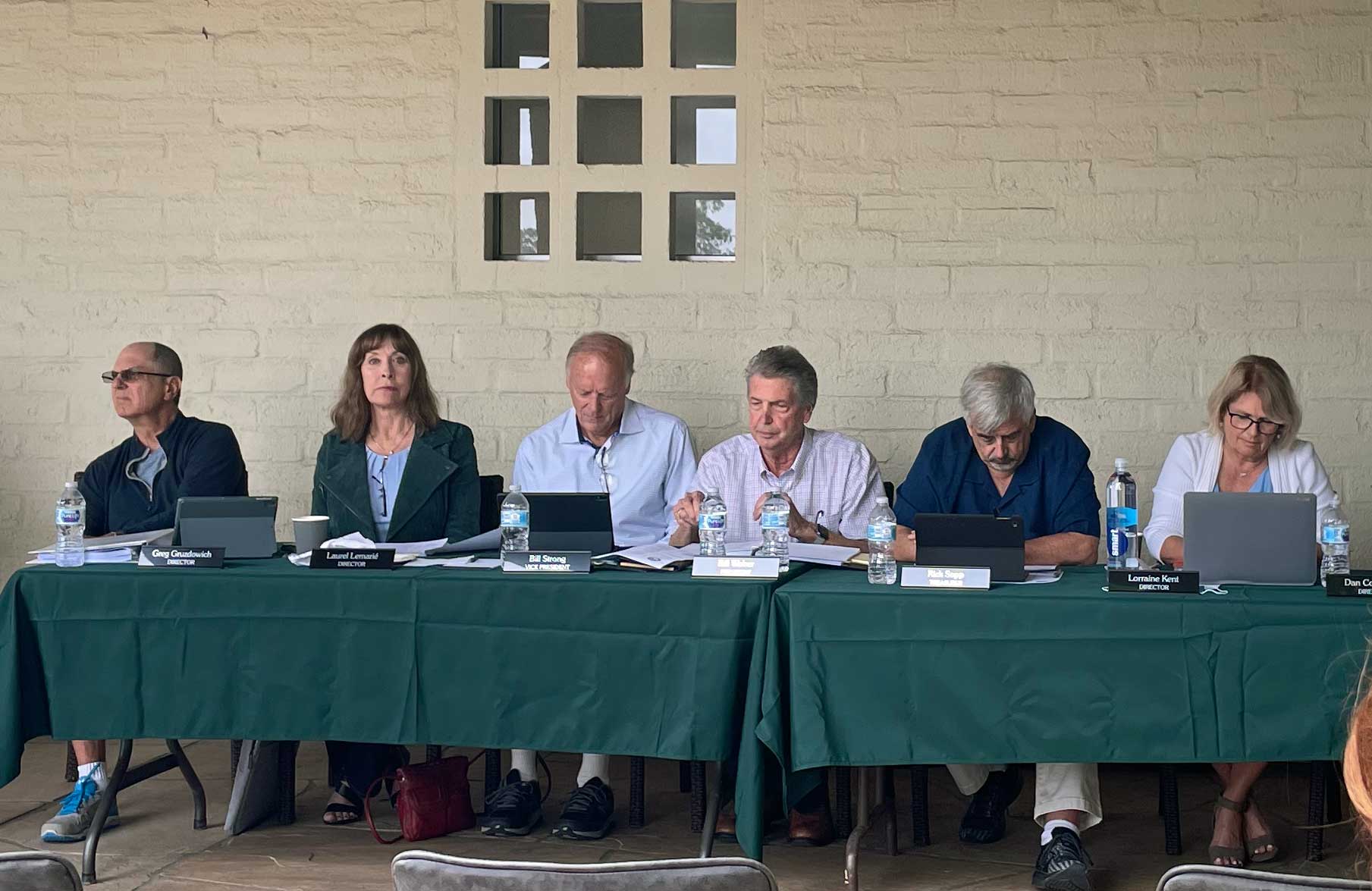 Quick summaries of everything other than Hardie Board restrictions that occurred at the October 7th board meeting.

Good news on SB9. The Association had previously raised the alarm over SB9, worried that it would allow land owners to bypass typical HOA restrictions of one dwelling unit per lot. At October’s board meeting, board president Bill Weber stated that they have a letter saying that SB9 does not pertain to HOAs. I did some digging myself, and found this video of the bill’s author saying the same. In addition, it looks like the entirety of the RSF Covenant geographic area is covered under the state historical designation explicit opt-out provision in the bill. At this point, I would say Rancho is safe from SB9 absent an expensive, tenuous and protracted legal battle that a land developer would probably lose.

Rancho is subject to the recently passed CA laws which allow homeowners to add a detached Accessory Dwelling Unit (ADU) to their home regardless of HOA restrictions and set backs. The Association has been getting annoyed that a few homeowners are using this new law to slightly exceed the Covenant’s 20% lot coverage restriction. Some homeowners building from scratch would submit plans at or near the 20% lot coverage threshold, and then come back later and apply for an ADU which would push lot coverage past 20%, which is allowed due to superseding CA law.

The RSFA board voted 7-0 at this October meeting to change the Covenant’s lot coverage definition to add an additional 1,200 sq ft of building if the homeowner is not building an ADU at time of submission.

The 20% lot coverage restriction rarely affects larger lots. A typical 2.88 acre lot has 25,000 sq ft to fit a house, garage, pool, sport court, etc. and stay within 20% lot coverage. However, if you have a 1/2 acre lot, you only have 4,356 sq ft to fit all that onto, and now the Association is going to subtract 1,200 sq ft from that amount unless you build an ADU (which you probably wouldn’t on such a small lot). This may actually make several smaller lots unbuildable or at least severely constrain them.

Board member Dan Comstock noted during the meeting that this new rule would disproportionately affect smaller lots (which were already impacted by a new regulation enacted last year) and asked whether there was any concern about this. Board member Bill Strong didn’t directly address this question, but restated the reasons (given above) for enacting the change. No other discussion ensued and the vote was 7-0 for making this change.

In the Association’s most recent email blast they said: “The Board of Directors … has directed that the Building Department and Art Jury include ADUs of 1,200 square feet in the 20% lot coverage calculation.” So this is now in effect.

So, based on this quickly written memo, without going through the process of turning this new restriction into a regulation (28 day comment period, etc.), nor even making a written resolution, the board simply votes to direct the building department to restrict homeowner’s building rights. Contrast this with the multi year process to dot the I’s and cross the T’s to allow Hardie Board. Unbelievable.

What do you think about this? Let us know at editor@rsfpost.com.

Speaking of the Building department, permit fees are increasing by 10% effective November 1st for all categories.

In the discussion, director Laurel Lemarié suggested that fees should increase even more since they are still lower than some nearby HOAs. General manager Christy Whalen said the Davis Stirling Act wouldn’t allow that justification for a fee increase – increases must be based on a cost study, not based on local comparables (ie. you aren’t allowed the use fees as an arbitrary revenue generating mechanism).

Director Bill Strong then asked that our fines should be increased when people are forced to submit as-built Art Jury approvals and was told that fines are a separate issue from permit fees. Note that Whalen had previously reported that three homeowners had been hit with such fines (which range from $2K to $10K and escalate) in the last month for building without an Association permit.

And now we get to the even more controversial agenda items. Buckle your seat belts.

A very comprehensive golf course tree replanting plan was presented to the board to approve. This would entail the creation of a planning committee composed of “Association staff, Golf Club staff, Greens Committee, Trails Committee, FHPC Committee and others.” Workshops would be “conducted early in the planning process to gather input from members who belong to the Golf Club, members with properties adjoining the golf course, and members at large.” That right there is enough for me to understand that this process will speed along at about the same rate that an oak tree grows.

Which may be fine, as there appear to be a lot of differing opinions (in the end, I think the various groups will find they aren’t that far apart).

Nonetheless, this rather slow thoughtful process was immediately attacked by acting golf general manager Shanon McCarthy and board director Dan Comstock. McCarthy stated that all golf club boards and committees hadn’t had time to weigh in on the plan.

Comstock proposed a motion, seconded by Bill Strong to table the tree replanting plan until the golf club is fully operational (December at the earliest). That motion was defeated 3-4.

Director Rick Sapp, seconded by Lorraine Kent, motioned to approve the plan. That motion was passed 5-2, Comstock and Gruzdowich opposed.

Personally, I was appalled at the knee jerk reaction against this replanting plan. This plan is actually very weak tea and will enable all golf course stakeholders to completely weigh in. The plan is just a skeletal framework, committing to nothing. If you read the plan, Comstock’s and McCarthy’s objections are misplaced.

I’m not going to waste your time recounting all the whys and wherefores for the next two items as they themselves are a waste of everyone’s time and energy. Ask me directly if you really want to know more. But there were contested motions back and forth, so for posterity:

Bill Strong with Laurel Lemarié seconding, moved to adopt the entire Residential Design Guidelines into the regulatory code. Motion defeated 3-5 with Lorraine Kent also on the losing side.

Bill Strong with Laurel Lemarié seconding moved to adopt a much revised Roles and Responsibilities document.

Strong stated that the existing document was a product of the Art Jury and Building department, while this version was developed by Lemarié and himself with input from others.

Speaking from the audience, Art Jury president Bill Danola objected to the document as being demeaning to the Art Jury (he used the word “tone”), and that Art Jury requested changes did not make it into the document.

Director Rick Sapp objected to various document statements which to him read like new policies were being put into place rather than a document that interprets and clarifies existing policy in the governing documents.

The motion was defeated 3-4 with Lorraine Kent also on the losing side.

Director Rick Sapp with Dan Comstock seconding motioned to move editorial control of this document back to the building department (and away from directors Bill Strong and Laurel Lemarié). Motion carried 5-2 (no prize for guessing who opposed).

Seems that the Association board got their knickers in a twist because the RSF Post republished member input that had been posted on the Association web site. After the Association general manager expressed concerns about member privacy, we reached out to all letter writers and obtained authorization to repost in the RSF Post. Yeah, we should have done that before publishing the letters (mea culpa), but everyone was cool about it, and of course, we will obtain prior authorization going forward.

But there isn’t going to be a going forward because the board has decided to not publish membership member input anymore after their one month “experiment”.

What a bad look. The reality is that the RSF Post is a major source of Association news for most people in Rancho. Yes, we have opinions, and they may not always be “right” depending on your point of view, but they are well argued and informative. HOAs often focus more energy on restricting homeowner rights than on providing useful services. I would opine that the RSFA is better than most HOAs, but it isn’t perfect, and the only way to hold it accountable is through the free flow of information.

Anyways, if you want to get your member input more widely disseminated, please simply send a copy to editor@rsfpost.com, and we will publish it.

Last, but certainly not least, the currently longest serving executive Association staff member, Arnold Keene, is retiring at the end of October as outgoing Assistant Manager. I know Arnold from when he was heading up the Parks and Rec department in 2017 when the fiber Internet construction project was dumped in his lap to manage. He did a great job in a very challenging environment. The construction design firm wasn’t up snuff and construction started while the Association wrestled with lack of authority to install fiber on our many private roads. He handled all these and other challenges with aplomb and an even keel that I know contributed mightily to the project’s success.