I was at the Golf Club’s Golf Board of Governors meet-the-candidates forum last night and Pat Newmark and I were sitting down about to chat. She looked at me with a penetrating stare and said, “Phil, I agree with a lot of what you say, but I don’t think you’re right about uplights”.

Now, I don’t know if you’ve met Pat before, but when she says something like that, in her proper schoolmarm voice, you listen. So I sat up a little bit straighter and she continued, “Have you been to La Quinta in the desert, and seen those palm trees lit up?”.

Wups! Yes, I knew exactly what she meant. La Quinta is full of stately huge towering palms and they are very nice, for a city. But I fully agreed with Pat, it isn’t at all appropriate for Rancho Santa Fe.

So I owe Pat a debt of gratitude for making me realize that some people might have misunderstood my stance on uplighting.

What I meant was, low lumen lights (unlike lights that light up a tall palm which are very powerful), lighting up short decorative bushes and trees. For example:

The two path lights on the left are about 20″ tall, and the two uplit palms on the right are about 4′ and 5′ in height. This is a nice low light-intensity view for what otherwise would be pitch black darkness.

The new proposed lighting regulation limits all outdoor lighting to outputting a maximum of 500 lumens per fixture. For reference, the path lights above were 425 lumens and the uplights were 400 lumens (LEDs). I think 500 lumens is a reasonable limit for landscape lighting, although I also think 500 lumens is a bit low for lights attached to a house. This fixture, for instance outputs about 900 lumens:

By the new regulation’s own conversion chart, a 500 lumen light is equivalent to a 31 Watt incandescent light, which is pretty dim. So, maybe some tweaking between what is allowed for landscape lighting and what can be allowed for outdoor lighting attached to a house is needed.

Anyways, I just wanted to make sure I wasn’t misunderstood about uplighting. As I mentioned in my own candidates forum, regulating lighting is complex and the devil is indeed in the details.

After a cordial chat, I think Pat and I agreed on pretty much everything, and, for what it’s worth, I’ll be voting for Pat Newmark for Golf Board of Governors. If I’m elected in my election, I hope to be working alongside Pat and others to resolve the important issues between the Golf Club and the Association at large. 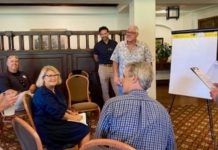 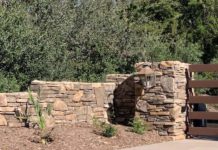 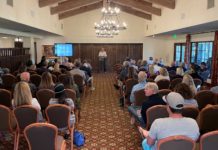 Lighting Town Hall: The Devil Is In The Details