Here are my thoughts on where we stand now with the SARS-CoV-2 virus and where we are headed.

Below is a chart of the number of new daily confirmed cases of SARS-CoV-2 infections in the US.

As you can see, the number is plateauing, if not even going down. Below is a chart of new daily deaths in the US attributed to SARS-CoV-2.

Again, plateauing, if not even going down. Which, by the way, is odd since you would normally expect deaths to lag new cases by about two weeks, so maybe we are seeing the beneficial effects of new therapies that are always being tried out.

Contra what you read in the headlines, the US is handling the pandemic well in comparison with other countries. If you look at both total infections per million population and total deaths per million population, we are doing OK. These charts come from Our World In Data and they have plenty of other charts if you want to geek out on data. To make meaningful comparisons between countries you have to take into account many factors. Countries have different population sizes. They have varying amounts of testing capacity and different rules on who gets tested. Even deaths attributed to SARS-CoV-2 is counted differently between countries. And then you have many countries that aren’t keeping accurate statistics (like China). 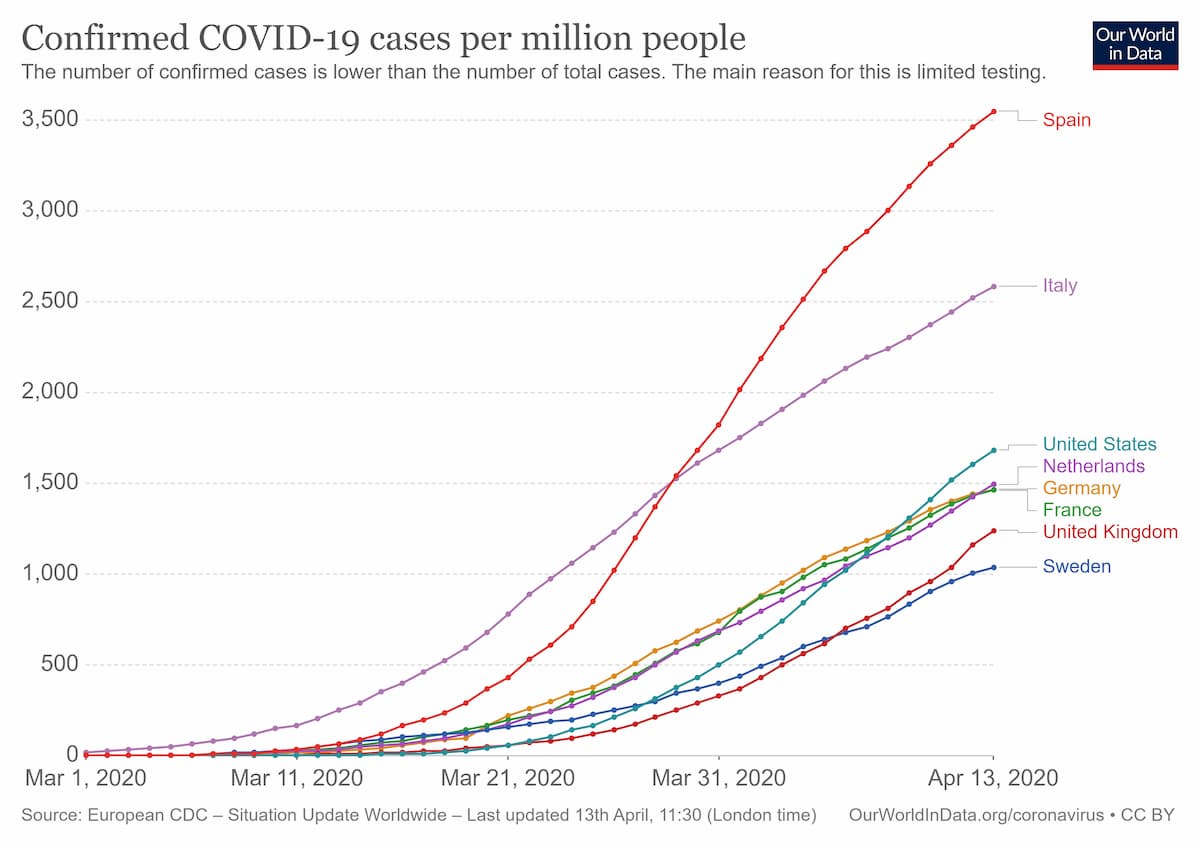 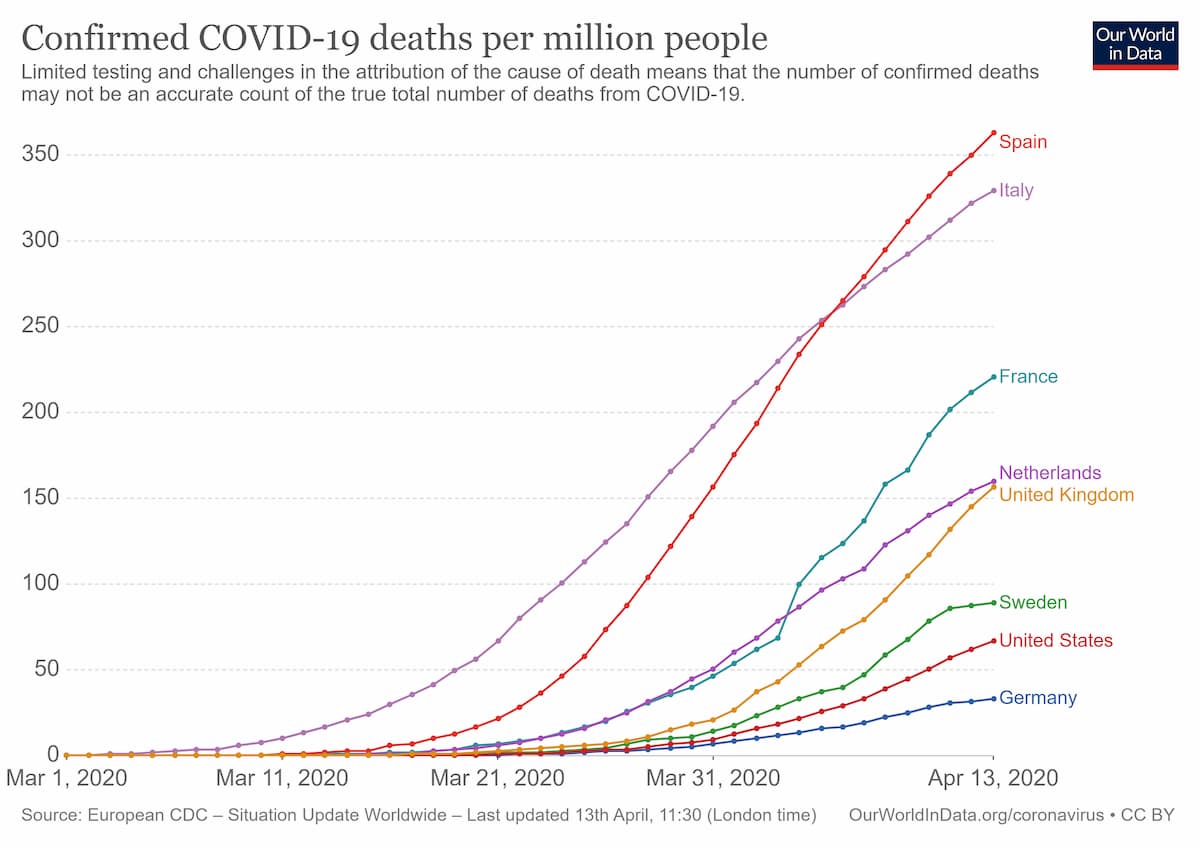 Even with these countries (there are only a few other countries whose statistics I would trust), the death rate is the most reliable number since it isn’t only the US that is having trouble ramping up testing.

Here’s a look at New York City, our country’s worse affected area, and the number of new daily hospitalizations due to SARS-CoV-2:

So it appears that from a disease outbreak point of view, we are starting to get this under control even in hot spots like NYC. In other areas, like here in San Diego, the number of new cases peaked about two weeks ago and was never really bad, with only 415 total hospitalizations, well within our healthcare capacity.

The political response has been fairly consistent worldwide. Extreme social distancing has resulted in a huge economic shutdown the likes of which we have never seen. Counter intuitive things are happening like hospital shutdowns due to lack of patients. The federal government is doing its heroic best to mitigate the economic damage through things like the Paycheck Protection Program, direct taxpayer payments and very generous unemployment insurance, although these programs are of limited duration.

So with the disease getting under control, what does the future hold?

What lies ahead is a combination of political policy response, and economic response. While the media has a tendency to focus on the federal government as the only political actor that matters, the reality, and especially in this situation, is that individual state governments play a big, if not the biggest, role. While the US President can suggest we either lockdown or open up our economy, it is only the individual state governors who have the power to actually do this for each of their states.

And I would argue that the only two states that really matter are NY and CA. If New York, the hardest hit state, were to even partially open, it would force the hands of most other states to follow suit. And CA matters since it has by far the largest GDP of any other state, and it’s the one we live in.

New York state, who has a Governor that is very driven by economic realities, stated yesterday that he wanted New York to open as soon as possible. Both New York and California announced today separate multi-state task forces that would co-ordinate their re-opening responses. Separately, Texas will be making an announcement later this week about opening up, and wants to be one of the first states to do so.

The media tide may be slowly turning from coronavirus panic to anticipation of the economy re-opening. Brit Hume just tweeted a link to this article which provides evidence that there isn’t much of a difference in death rates between states that locked down and those that didn’t. This article signed by six doctors argues for opening up our economies as soon as possible.

My considered best guess is that some smaller and more isolated states will start to open May 1st, while NY and CA might do so by May 15th. Restrictions will still apply. Schools will no doubt be closed until the fall. Concerts and mass spectator events will be restricted for a while yet. But we might start to see sporting events with no spectators sooner rather than later. Most importantly, people will be allowed to go back to work.

And since we have a mostly free market capitalistic economy, it will adjust quickly, in real time, through the millions of decisions individual business owners and consumers make on a daily basis. I’m hopeful about the future. Stay safe. 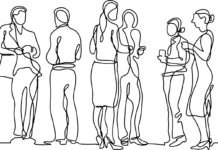 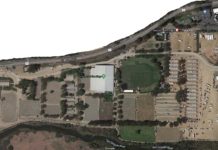