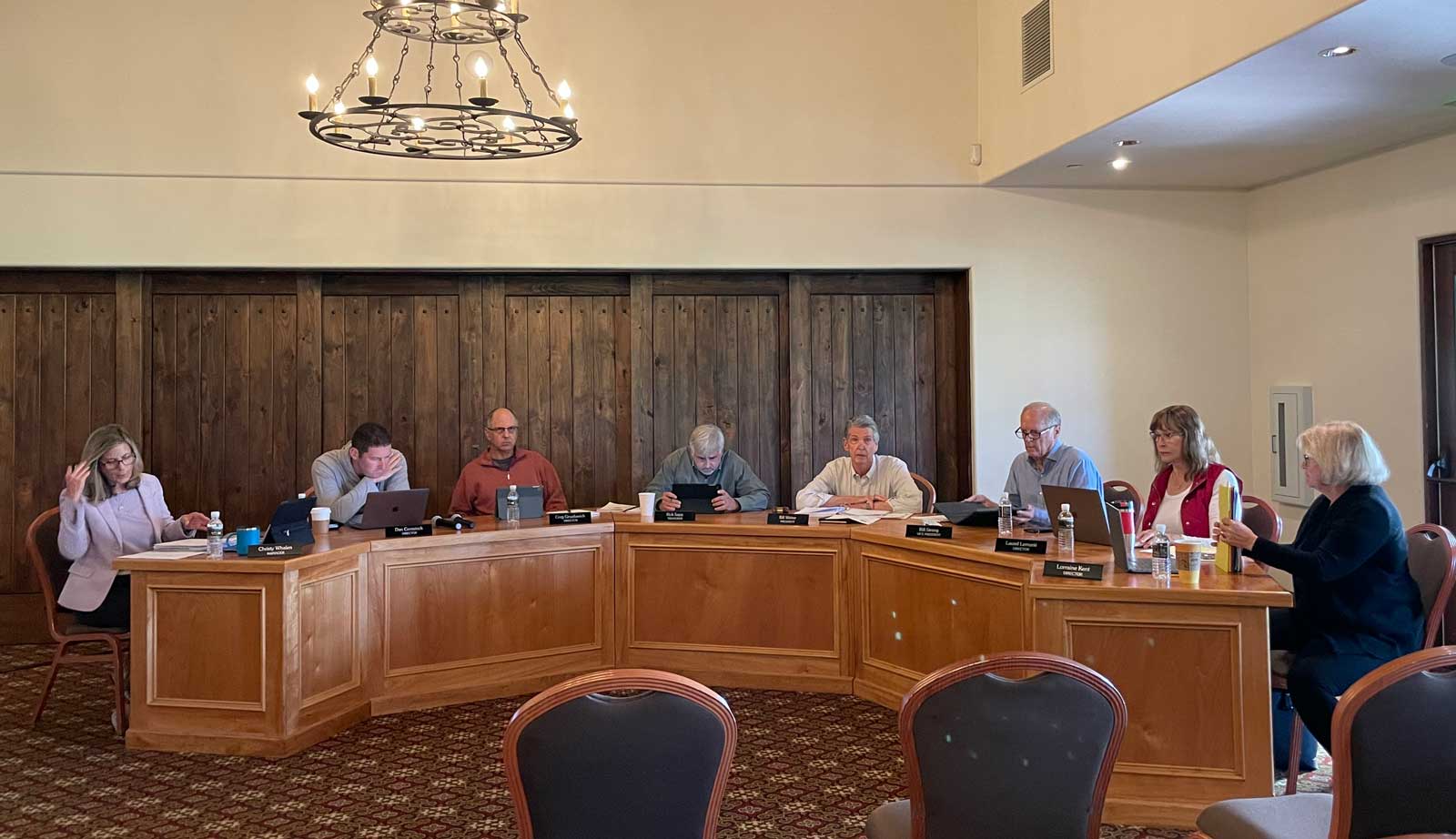 The Board got an upgrade in the form of new furniture to sit behind courtesy of a fire department remodel.

The political process to write laws has been likened to the workings of a sausage factory. You really don’t want to know the gory details. Association politics, votes and debates are no less messy as this month’s board meeting shows. Let’s dive right into the contested bits before moving onto other no less informative items.

The pro-Hardie Board voting block would not be deterred this time. Staff had prepared an amended Chapter 49 of the regulatory code which regulates exterior materials, this version allowing wood and Hardie Board to be used as exterior construction materials. With that in hand, directors Greg Gruzdowich, Lorraine Kent seconding, motioned to rescind Board resolution 2019-103 (which had outlawed Hardie Board) and to accept the amended regulatory code chapter for publication for member comment.

There was a twist. The Art Jury had asked for a much more complicated change to chapter 49 that would have constrained future Art Juries but had a few flaws. For instance, it would have outlawed shiplap wood (or Hardie board) applications, something that should be left to the Art Jury as an aesthetic judgement on a case by case basis.

Director Rick Sapp argued for publishing both versions of chapter 49, and moreover, not rescinding the Hardie Board restrictions until the revised chapter 49 was in full effect, which would have delayed the process by at least another two months. His reasoning being that we would be left with no regulation on Hardie Board until the new chapter 49 was formally adopted.

Director Laurel Lemarié pushed back arguing that 2019-103 was never posted for community input in the first place and had it been, we wouldn’t be in this situation today. Sapp interrupted, re-arguing his points and when Lemarié tried to continue her push back, Sapp barked “Can I speak?”. Yikes.

Gruzdowich pointed out that not having a regulation regarding Hardie Board in place for a month or two is a facetious argument since it is obvious with anyone with a brain (my words) what the Board’s intent is going forward. Meaning the Art Jury would be free to exercise their prerogative with that in mind.

That argument, in a nutshell, encapsulates a lot of my frustration with this and other Board actions. They worry so much about dotting the Is that they forget that delaying votes by months, or years in some cases, has actual real world negative consequences. People are being prevented from building fire safe barns or remodeling their houses with fire safe materials while the board takes over a year to tie a bow on a document. Here we are objecting to the Goodson apartment complex on our doorstep due to fire safety issues, and we don’t even allow our own members to use a firesafe wood alternative? The hypocrisy is mind bending.

In the end, Sapp and Weber voted against the motion, Comstock, Lemarié, Kent, Strong, Gruzdowich voted for it, motion carried 5-2 and homeowners can now use Hardie Board.

Another contentious vote. A homeowner had built a new house along with a horse riding arena and several barns, hot walker, etc. on a parcel. The homeowner failed to seek permits for several items and the riding ring and part of the horse walker intruded into set backs. A stop work order was issued, the case went to mediation. In mediation, the current neighbor who was affected by the reduced side setback stated it didn’t bother them.

At the board meeting, staff stated that the homeowner had complied with all mediation items.

The debate boiled down to process versus regulation enforcement. Sapp (who was the attending board member during the mediation) argued that the Association should comply with the mediation settlement and approve the set back variances. Lemarié argued that the variances were egregious and that the board didn’t actually have authority to grant the variance since the Association’s own regulations state that four conditions must be met to grant a variance, and in this case two were not met (there’s no hardship, and there is nothing unique about the lot).

Sapp then motioned to approve the variance. More debate. Kent asked for more time to study the matter. Sapp withdrew his motion. Comstock with Gruzdowich seconding motioned to approve again. Lemarié asked that the Association’s lawyer be consulted to ensure that the vote is legal since all four conditions weren’t being met. Weber called for the vote to approve the variance, it carried 4-3, Comstock, Gruzdowich, Sapp and Weber voting for approval.

Various unbudgeted expenditures sailed through on 7-0 votes. The Association’s finances are so strong, cost wasn’t an impediment.

The Association will spend up to $30K to hire a firm to prepare and analyze a community survey on demographics, wants, needs and opinions.

The infrastructure committee asked for $86K to repair/replace/add two sidewalks in the village (both used by school kids).

Sidewalks wouldn’t have been my first choice to spend money on, but I can’t fault the concept of improving our facilities and infrastructure. The Association has money right now, not the least reason being the $1.5M government loan forgiveness last year.

There are a lot of things the Association could spend money on to improve our lives. But it takes a champion to make these projects a reality.

The restaurant remodel is an example. It is going nowhere. The 3×3 committee who is supposedly in charge of the project at the top level hasn’t met for months and is so disorganized that the chairman Bill Strong vented his frustration at this Board meeting saying “I don’t even know who is on the committee”. That project certainly needs a champion. May I be so bold to suggest it be someone who has run a profitable restaurant before? I am sure in our 2,000 members, we have such a person.

Our sports fields could use some more TLC and maybe upgrades (like bathrooms!) and I have heard that student enrollment at Roger Rowe is way up this year. Maybe one of our parents could take it upon themselves to spearhead a sports field (and bathroom!) project.

The County is towards the end of a redistricting project which will likely erode any political power the Association has with a County supervisor. Not that we had much to begin with. We are currently in a district that includes North County giving us a modicum of support. But all the proposed new maps range from bad to awful for us. Get involved in the process by clicking the above link if you’re interested in knowing more.

Universally acclaimed by participants, spectators, and USTA officials, the Tennis Club’s RSF Open Tennis tournament was a resounding success. While it didn’t quite make as much money as anticipated (it fell short about $20K), at least it was profitable and many lessons have been learned for next time. Look for a possible men’s USTA pro futures tournament in summer 2022 (still very much at the concept stage).

I wrote a little mini-review of the now open renovated front nine holes in our discussion forums. Back nine sod is substantially complete, and while I heard no expected opening date for the back nine during the Board meeting, I assume we are still on track for mid-December. County permits are still holding up the practice area remodel project which now won’t happen until spring at the earliest.

In case you missed it, here’s a short 15 second clip of the official unveiling. We now have a handsome statue and plaque in the village park:

By the way, I’m mildly surprised that the various people and groups that organize local activities don’t use the RSF Post to reach people. We don’t bite, we don’t charge advertising fees. An article about how great Celebrate Osuna is, for example, would be appreciated by many people. Same for the Lillian Rice statue unveiling, Halloween in the Village (which did get a huge attendance this year), etc. Send articles to editor@rsfpost.com. It’s easy.

And that’s a wrap. Oh yeah, Goodson apartments will be voted yay or nay November 10th. Consider attending the Encinitas City Council meeting to show opposition to the project.

Have a great weekend!