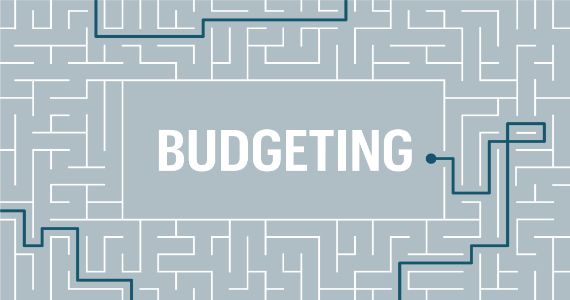 The RSFA held a special Board meeting Thursday May 5th to affirm major assumptions that went into developing the 2023 fiscal budget. A presentation of the budget itself will be given this coming Tuesday May 10 at a special open finance committee meeting at 8:30am via zoom (see link via Association website, or ask the Association or me for it).

Note, these are budgetary numbers for 2023, actual results may be better or worse than this (recently the Association has been beating their budgets, ie. the numbers have turned out financially better). And these aren’t necessarily the final budget numbers since they haven’t yet been formally adopted by the Board. Changes may still occur.

This topic took most of the meeting’s 1h 40m time.

Some background. Way back in 1987, the golf club and the Association created an agreement whereby the golf club would be left to run its operations autonomously as long as it didn’t incur persistent deficits. Since almost all golf country clubs provide a club restaurant as part of their membership benefits, the golf club took on the full responsibility to run the restaurant and assume its operating losses (almost all golf club/country club restaurants run at a deficit since they have a limited clientele to draw from). However, they agreed that all Association members would also be able to use the restaurant.

From a financial point of view, this was a win-win for both “sides” in that the golf club would shoulder lower deficits if the golf club could draw customers from a larger pool, and all Association members would gain access to an exclusive membership restaurant without having to shoulder deficits.

Note that from a legal and financial point of view, the golf club isn’t a separate entity. There is only one entity, which is the RSF Association. However, from a management point of view, it makes sense that you have golf focused management/members running the golf club. The 1987 agreement can be terminated by a majority vote of the Association Board.

In fiscal 2020, the golf club asked the Association Board if they would shoulder half of the restaurant deficits. Here’s the June 2019 RSF Post article describing this agreement along with links to various presented rationalizing the agreement. The Association Board agreed to a cost share with the proviso that either Board (golf or Association) could vote to opt out of the cost share agreement. The agreement also provided for oversight by a 3X3 Committee that would include three representatives each appointed by the Association and golf club, as well as the Association’s Manager and the golf club’s General Manager. Though the first-year’s budgeted deficit was $674K, the Association’s share for that year would be capped at $300K, and future years’ would be mutually agreed upon, based on the proposed budget for the restaurant for that fiscal year. The $300K amount remained in fiscal 2021. In 2022, the cost share calculation was modified to include more overhead expenses, and the golf club budgeted a total deficit of $941K, with the Association paying $470K.

Golf Club Asks For More Expenses To Be Added

In this meeting, the golf club asked for even more expenses to be added to the cost share calculation: 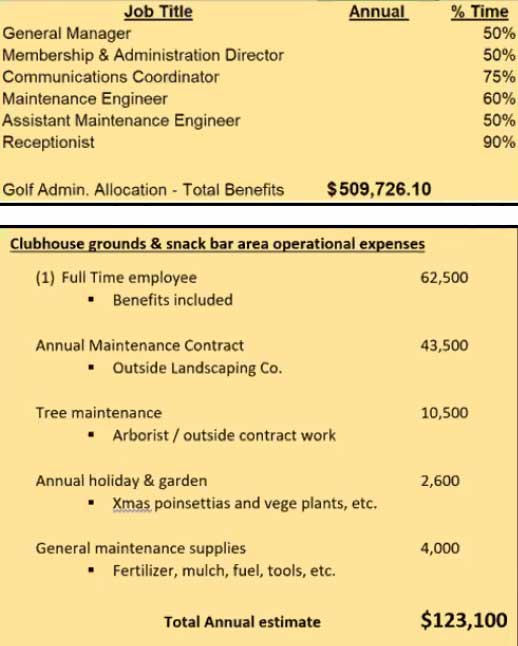 These extra budgetary expenses would add $632K to the $1.6M loss resulting in a total budget deficit for restaurant at $2.2M, of which the Association’s share would be $1.1M (instead of the $807K calculated under the current agreement).

Needless to say, there was a lot of back and forth discussion. In the end, the Board voted 5-0 to keep the cost share calculation the same and not take on the extra expenses (Director Gruzdowich was on vacation and director Comstock had to leave before the vote).

Director Laurel Lemarié, commenting on how the golf club is inching closer to losing its autonomy with larger and larger cost share agreements, said “Dick Scuba would be rolling over in his grave if he saw this”. Dick Scuba was one of the original authors of the 1987 autonomy agreement. She also questioned why a continued 50/50 split since the latest figures show only 40% of food is consumed by non-golfers.

Director Lorraine Kent pointed out that based on the current budget, the golf club would still be running an operating profit even with no cost share agreement in place.

Director Bill Strong said that lost in all this budget talk was that the both the golf course and the Association should be working together to strengthen the restaurant to make it a truly special community asset. To that end, effort should be made to increase the restaurant traffic volume for all members by making the restaurant a more attractive place.

Rick Sapp pointed out that by metrics contained in a recently published white paper, the budgeted restaurant deficit would make it one of the worst financially performing club restaurants in the United States.

Blair Nicholas, president of the Golf Board of Governors, said these comments were hard to listen to as he knows how hard their professional leadership has worked. Special events (eg. Easter) have been sold out. He went on to say that “not one member has given ideas on how to operate the restaurant better” (OK, see my comments below). He also pointed out that the split isn’t really 50/50 since golf club members are also Association members, so they end up paying for the restaurant deficit twice (once through golf club dues, once through Association dues), meaning 2/3 of the restaurant deficit is borne by golf club members.

Nicholas concluded by saying that the golf club is now not prepared to help pay for a restaurant remodel at all, even at a 50/50 split.

Association Board President Bill Weber pointed out that the 3×3 committee was set up to oversee the cost sharing agreement, and that, perhaps, would be an appropriate place to have these discussions. He also called on the relatively new golf club general manager, Todd Huizinga, to give guidance on how to make the restaurant a vibrant community asset.

Nicholas then pointed out that many other clubs use a quarterly food and beverage minimum to drive increase customer traffic. He stated that a restaurant renovation will never recapture associated costs.

Weber pointed out that food and beverage minimums are appropriate for private clubs where members have opted to join. Imposing such for the entire Association where no one opted to join would be a different situation.

As mentioned at the outset, the Board was not persuaded and voted to leave the restaurant cost share calculations the same as last year.

My Comments (Since I Can’t Help Myself)

Blair Nicholas mentioned that special events (like Easter, Mother’s Day) have recently been sold out. Special events are normally where a club makes a lot of profit since you have a full house. However, their prices are low in my opinion. For example, the golf club is charging $85/plate for the upcoming Easter brunch. In a typical banquet, an $85 plate is fairly pedestrian. But the club’s offerings are better than pedestrian. My point is that given the club sells these out, and is offering a high end food experience, I suspect prices should be higher.

The same could be said for menu prices. I have noticed sit down menu prices have jumped a lot recently in nearby restaurants. The reason why deficits are expanding is that projected revenues are are increasing by 18% from last year while all expenses in total are growing by 29% compared to last year. This isn’t sustainable, and should result in higher pricing or some program to increase customer traffic (see chart below):

Speaking of increasing customer traffic, why isn’t anyone involved with the restaurant using the RSF Post and RSF Review as free sources of PR to tout changes the restaurant has recently made? The restaurant actually has good reasons why you should frequent it more often, yet they aren’t telling us about the changes in all available ways. Free PR. Use it.

With that big debate out of the way, CFO Seth Goldman wanted to make sure the Board knew that, including the $807K restaurant cost-share, they were going to pass a budget that had a $580K projected general services fund balance decrease. While the Association has more than enough funds to absorb this loss for one year, Goldman made a point of saying “this wasn’t sustainable”. He pointed out that an extra $0.01/$100 of assessed value increase equates to an approximately extra $600K in total assessments, so that if the Board wanted to pass a break even budget, they could raise assessments by $0.01/$100.

The Board opted to keep the assessments at $0.14/$100 and not increase it at this stage in the budget cycle.

Director Laurel Lemarié wanted to discuss the possibility of increasing the penalty for submitting an as-built permit application. She stated that the same people (architects and builders) keep not acquiring permits, and if caught, will simply pay the as-built penalty, which is currently double the regular permit cost. For instance, the fee for a new building permit is proposed to be $1,900 in the 2023 budget. If you submit an as-built plan, it would cost double, or $3,800. Lemarié wanted to change that to 3x or 4x from 2x since a 2x penalty doesn’t appear to be dissuading many people from taking a chance and submitting as-builts.

It was pointed out that changes to the fine schedule can be done at any time, it isn’t really a budget matter, and it needed a 28 day comment period. So the suggestion was that it be brought up as an agenda item in an upcoming Board meeting.

So there you have it, more sausage making than you ever wanted to know about. To see the 2023 budget described in more detail, check out the Tuesday morning open Finance meeting.