To do my part as a Village Viber, my family’s kicked off summer with a staycation at the beloved and beautiful Inn, and I can confidently confirm that I’ve not had the displeasure of encountering a bed bug or a prostitute. That hideous blight of a protest banner isn’t even about the Inn, so I think it’s time the Bolsheviks march their eyesore onward. I’m all up for revitalizing our sleepy Paseo D. strip, but First Amendment politicking wasn’t exactly what I had in mind. More like something deeply revolutionary like a grocery store.

Speaking of exercising one’s Constitutional liberties, our RSFA Board election wraps up today. If a Covenant Member has not yet voted, they have until 5PM today (Monday, June 10) to submit their ballot to the Association. The RSF Post has been chock full of helpful information regarding the candidates (including for the first time ever downloadable video interviews) and why you should vote YES on the 2019 Bylaw Amendment, which puts the ultimate say on densification projects in the hands of all community members via an automatic and binding vote. The 2019 Bylaw Amendment has the unanimous support of all current RSFA Board Members and the RSF Post.

In a recent article celebrating the RSF Post’s five-year anniversary, our very own founder, Nick Krnich, says he’s checking the box for YES on the 2019 Bylaw Amendment and RSFA Board Candidate Bill Strong: “Bill is brilliant, incredibly knowledgeable of Covenant history, and dedicated to the success of our community.” Covenant Member Saiid Zarrabian and a long list of fellow residents back Bill Strong and the 2019 Bylaw Amendment too in order to best protect our rural Ranch.

Our “Back at the Ranch” columnist, Jane van Praag, weighs in on the election as well, arguing that there’s a two-party Golf Club vs. RSFA issue in our HOA and that residents should vote for the candidate who will not only safely protect the Golf Club, but all RSFA Member interests as well. In a similar vein, Covenant Member Lisa Bartlett writes a lengthy description of the issues facing the Golf Club and the RSFA, and why it’s so important to “Elect A RSFA Member Who Will Represent Us All.” Columnist Phil Trubey also chimes in on the issue, writing that “one of the major policy decisions the new Board will tackle will be a potential Golf Club restaurant remodel.” With that in mind, he does a little digging into the RSFGC’s finances.

And just when one thought all this inside-the-Beltway talk would please for the love of GOD end, the politics of the Rowe school saga continue. The RSF Post’s anonymous community forum has, as my English husband says, “hotted up” recently as budget cuts and teacher layoffs continue to fuel controversy. As I mentioned in “Crises, Cuts and Comebacks“, while it’s agreed the deficit’s got to be fixed, it’s the manner and solutions that are at issue.” In “Teachers Unfairly Bear the Brunt of Rowe Budget Cuts“, parent Julie Buechler points out that “there seems to be some duplication of costly positions that could be combined to not only save a lot of money, but our invaluable instructional positions as well.” Fellow parent and resident Stacy Harris, laments the loss of teachers too in her “farewell letter” and Andreas Bendl writes a note of appreciation to former lower school principal, Kim Pinkerton, who has accepted a new principal post at Skyline School in Solana Beach.

While he’s not a Rowe parent, resident Jeff Mayer makes a pretty poignant bird’s-eye-view observation: “Coverage of the school lately tends to focus on monetary shortfalls and deficits, but . . . the real cause of declining student enrollment is the lack of basic services in the Ranch”. Jeff Mayer for RSF Mayor. I jest, but if he’s not going to run, I hope the RSFA Board candidates who are elected tomorrow actually tackle our own proverbial behemoth of a living-room Ranch elephant: livening up the village. No flesh-eating parasites, the oldest profession, or politics needed. And I’m not talking like perestroika here either.  Just more basic services. That’s all. 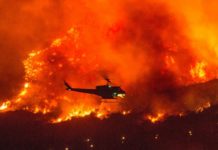